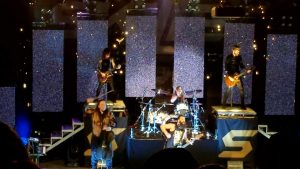 Skillet and Ledger kicked off the Victorious Tour Friday night in Omaha and Saturday night in Sioux Falls.  Ledger was the opening act, and curiously, at least on Saturday night, during the song Warrior, John Cooper was not on stage singing, but Jen Ledger pulled off the song seamlessly without his male vocal parts.  Ledger kicked off her concert with the song “Iconic”, which we play on both The Blast and The Blast Blender.  Skillet started off their show with “Feel Invincible” which we shot in its entirety:

Cross The Divide video for “Lose Myself In You” Is Out! Testimony About How God Used The Protest Valor Video
Scroll to top